It’s horrifying, because I pride myself in being reliable. Often, I wake up in sweat, relieved that it was only a dream.

But others have other types of dreams, which struck me recently. Do dreams define our personalities…or most of all our anxieties?

Chris often have dreams of people accusing him of something that he did not do. Especially the kind of thing where he was in the wrong place at the wrong time. Or worse of all, friends who he thought he trusted would turn against him and blame him for some wrong.

I once had a dream…perhaps it wasn’t a nightmare, but more of a possible scenario in a dream…where I lived in a world where the population had grown to its capacity. In order to address the issue, the government randomly sent letters to a selection of people. Completely randomâ€”no selection by age, career, race, or class. In the dream, I received one. As part of my civil duty, I went to the indicated location without much protest. I believed in duty. There in a large room, the selected ones would stand on a scale-like device. Then it would count down. At zero, we would vanish as if we were never there.

Delayed of course due to my insane schedule of jobby, commute, laziness, and slow computer.

What did I do for Bay to Breakers this year? Although there was much talk about the crackdown on alcohol, I was still adamant on attending. Despite the fact that in the last year that I have willingly stepped away from my former love of flash mobs and SF pranks (See valentine’s day pillow fight and bring your own big wheel), I wouldn’t give up Bay to Breakers. For the longest time (realize that I am a Bay Area native), I thought Bay to Breakers was some dull race in San Francisco where people rallied together in happiness and tears to run across the Bay Bridge. Actually I was completely wrong. Besides, why would you run across the Bay Bridge when you could do the Golden Gate?

So Chris brought me to my first one (or actually my friends at the time did) in 2007. Ever since then, I was hooked…mostly because it was a place to see creativity. To see excitement. To see…true community.

Although I am not exactly a huge fan of drinking, I think everyone should behave responsibly. There’s a sliding scale of having fun. The kind where your fun is infectious and as a result everyone else has a great time as you. Then there’s the kind where the fun infringes on others’ personal space and pursuit of happiness.

But regardless…this year for Bay to Breakers 2009, Chris and I woke up late due to my miracle berry party and the sudden unexpected heat wave.

Anyway, Chris dressed up as the ultimate gamer. The kind that plays games all day in boxers. Has a holster for his game controllers…and Guitar Hero guitar. Oh wait, that’s Chris!

And I dressed up as Faith from Mirror’s Edge. Many did not know who I was. But on the muni, an asian guy that I recognized from various events spotted me and as he was departing the train, he said nonchalantly that I nearly did not notice, “Nice Faith.” This year near the entrance of Golden Gate Park, I saw a twentysomething guy suddenly run wildly being chased by two (real) police officers. He ran in circles around the crowd. People gave him space to run. I saw several people try to block the officers. Eventually, someone chest bumped the guy slowing him down and the officers tackled the guy to the ground. Yelling at him while they cuffed him, they hoisted him to a nearby car. The officer yelled in heavily accented English, “I saw you take the bottle from your friend!”

And like everyone else, I walked away, not sure exactly what I was supposed do. Moments later, I was back in my character trying to free run up obstacles but realizing that I am not as agile and strong as Faith.

(I promise to post something about miracle berry quite soon!) Toad, me and Winnie the Pooh And the stint at Astro Blasters Some people say that the most important passwords are the passwords you keep for your financial services. But to me, they aren’t the most important. They are tangible with possible face-to-face transactions. I can walk to my bank and talk them into resolving my issue. Forgotten password? Easy.

Well the joke is on me.

Wacko
Supposedly interesting shop with interesting stuff. However, it just seems like yet another Therapy-like store with funny stuff, hip stuff, and expensive stuff. We’ll see!
4633 Hollywood Blvd in Hollywood

826 LA – Echo Park Time Travel Store
I have been to the pirate store, the boring store…and stood outside the superhero store. Now to visit the time travel store.
1714 Sunset Blvd in Los Angeles

Sunset Hills area
Because that’s where Entourage took place. Mostly. And also the people from the Game.

He was an older man. Older than the other passengers on the train…distinct from the twentysomethings and thirtysomethings of the usual commute up and down the peninsula.

I spotted an empty seat from him.

“It’s not news. It’s propaganda.” Faith said to her sister.

Faith! Wanted in the world of Mirror’s Edge.

The Wanted poster (by EA)

Faith at Bay to Breakers! (And tiredly waiting for the N.) 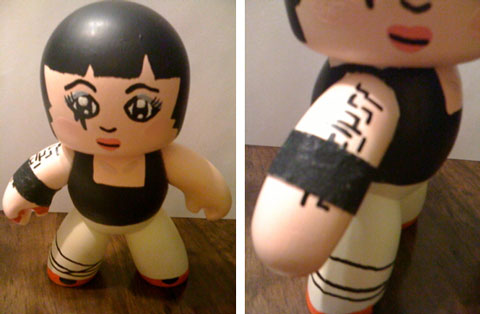 Fortunately, none of my major concerns causing anxiety happened.

There was a class I took recently…one where I was rather timid and shy. During the class, I awkwardly talked to people. Sometimes I succeeded in making pleasant conversation. Other times, I crashed and burned. I knew everyone thought I was very quiet with my reserved demeanor and cautious decision-making.

At the end of the class, everyone said their goodbyes. Hugs abound. People enjoyed everyone’s company and someone suggested having a get-together. Perhaps a reunion. An email thread started, but I could tell that nobody was making the initial move to stake a place.

So I did. I proposed a time and a location. I suggested an itinerary, gathering nearby places for dinner and suggesting potential transportation. Without thinking, I had organized the event…outspoken in my event planning and proposal.

When we did have the reunion, I was back to my timid self, suddenly almost dreading having to socialize. But I tried to suck away my anxiety and…then it was ok. When people thanked me for organizing the event, I shyly replied, “Ohhh..no problem…” Almost wanting them not to have really noticed me.